If cars are less popular than they used to be, it is less the case with the compact size segment. That's because the format is still popular, obviously, but also because the models offered by the manufacturers are of high quality. Just think of the Mazda3's two main rivals, the Toyota Corolla and the Honda Civic.

To learn more about the former, Baie-Comeau Mazda on the Côte-Nord near Pointe-Lebel and Chute-aux-Outardes introduces you to the 2021 Mazda3. Your dealership and garage in Baie-Comeau offers you the possibility to use the Mazda configurator to create your own model according to your needs. We offer you a complete range of new Mazda vehicles and a large choice of used cars for sale in Baie-Comeau; the choice is yours!

While waiting for your visit to the dealership, here are some of the elements that make the Mazda3 stand out in its category.

When it comes to reliability, you would think that the Toyota Corolla would be at the top of the list, followed by the Honda Civic. While both cars are very reliable, it's Mazda that offers the best results in this area.

How do we know? The latest survey conducted by Consumer Reports magazine just last fall. The industry-leading organization compiles its annual rankings, and Mazda is now at the top.

How did Mazda manage to accomplish this feat? According to the magazine, it's mainly because of the mechanics used by the manufacturer, which are paired with conventional transmissions that are much more robust and solid than many continuously variable transmissions found in the competition. Also, when it comes to technology, which is often capricious, Mazda uses simple and proven approaches. In short, it's with a Mazda3 that you will get the best performance in terms of reliability.

On this point, there's little dispute that the Mazda3 is the most fun to drive in its class since its debut in 2004. The arrival of the latest generation hasn't changed that; in fact, the gap with the competition has widened.

Driving a Mazda3 is always an opportunity to renew a pleasure that puts a smile on your face. In terms of driving pleasure, the Toyota Corolla certainly can't compete with the Mazda3. As for the Honda Civic, it's also fun to drive, but it lacks that little bit of incisiveness that defines the experience behind the wheel of a Mazda3. 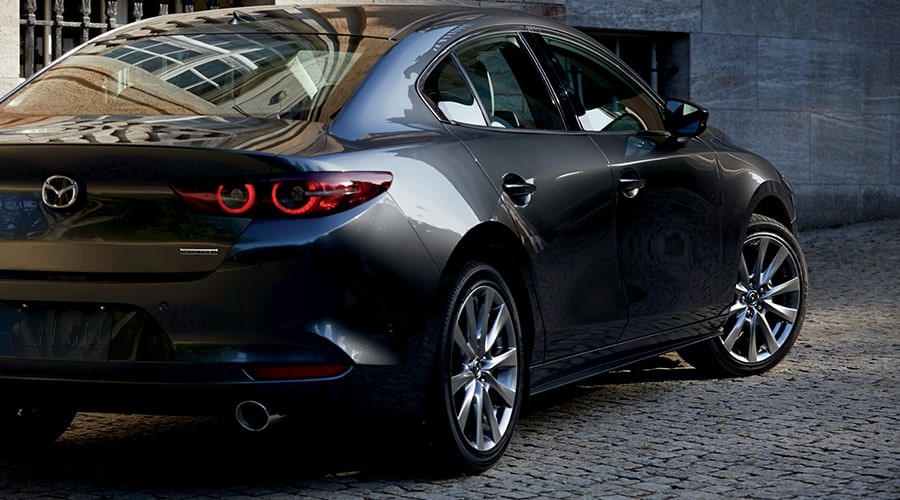 We'll avoid bombarding you with an avalanche of numbers here, but when you compare all the engines offered with the Mazda3, you'll find that for similar models from Toyota and Honda, Mazda's engines are much more spirited.

This is true with the base configurations, but also as you move up in the lineup. In fact, the only engine that's more powerful than the one offered in the turbo version of the Mazda3 (250 horsepower and 320 lb-ft of torque) is the Civic Type R's engine (306 hp), but we're talking about a car that's solely focused on performance and has a much higher price tag.

Otherwise, the advantage goes to Mazda across the board. And that's without considering the fact that the power distribution is optimal thanks to Mazda's gearboxes, which are better tuned in every way to offer an exciting driving experience.

The Mazda3, the Toyota Corolla and the Honda Civic are all available in hatchback versions, but Mazda has the best cargo volume with a capacity of 1,334 litres. For Honda, we're talking about 1,308 litres, while Toyota's Corolla hatchback isn't really in the running. We won't even mention numbers because it's embarrassing for the manufacturer.

In short, as the points analyzed above allow us to conclude, the Mazda3 is at the top of the compact car segment when it comes to determining which is the best purchase. Don't hesitate to come and discover it in person at your Baie-Comeau Mazda dealer. The whole team is waiting for you.

Fall: Pre-Winter Tune-Up of Your Vehicle